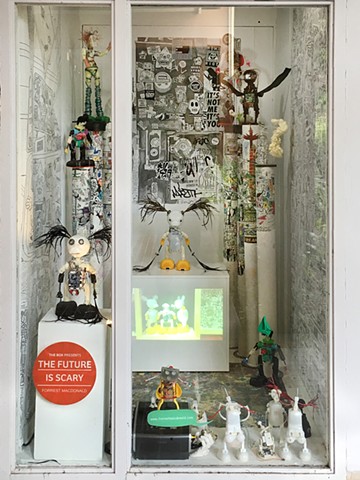 THE FUTURE IS SCARY is a mixed-media art installation that draws inspiration from previous projects that express apprehension for tomorrow. Presented in a glassed-in exhibition space known as The Box at the University of South Florida, The Future is Scary is comprised of nine kinetic sculptures, a series of nine short films on a video projection, and street graffiti inspired canvases adhered to the walls.

The most startling component of this installation is a collection of moving sculptures that find their creative roots in MacDonald’s earlier Wired Up series. However, these artistic offspring are not at all friendly characters built from discarded technology. They are instead animated plush children’s toys stripped of their warm fuzzy exteriors to reveal moving constructions that are both mechanically fascinating and psychologically unsettling.

Salvaged from second hand stores, MacDonald removes all the fabric and stuffing from the discarded playthings and consequently, most of their distinguishing characteristics. This deconstruction erases the identities of these popular children’s characters rendering the structure and, in some cases, the voice boxes, the only remaining clues to their former selves. Since these dancing skeletons no longer bear much resemblance to their original cheery benefactors, their movements now seem jarring, stilted and somewhat threatening. Coincidentally, there is an air of inappropriateness to the movements of a couple of characters that feels far too adult for a child’s toy. To enhance this blatantly unnatural movement, MacDonald adds feathers, fabric, and other media to the flailing appendages. What was once meant to comfort, now does nothing of the sort and this surprising uneasiness warns that The Future is Scary.